What is the Chinese Zodiac? 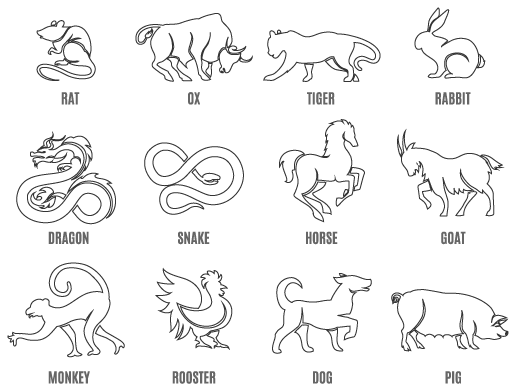 The general consensus is that the zodiacs originally had something to do with the worship of animals. A zodiac system has existed in Chinese culture since the Qin dynasty, more than 2,000 years ago.

There is a close relation that Chinese Astrology holds withthree harmonies theory of Earth, heaven and water and Chinese Philosophy. A mathematical cycle of 12 years serves as the basis of this ancient knowledge in which an animal symbol is used for the representation of each year. Chinese Astrology's foundation is believed to be based on these 12 Chinese New Year animals symbol including Tiger, Ox, Dragon, Rabbit, Goat, Horse, Rooster, Snake, Pig, Dog, Rat and Monkey. Some texts might use Sheep for Goat and Boar for Pig.

Certain years are assigned to these animals and therefore the Chinese zodiac sign of a person is basically decided by the birth year of a person. Along with years, these animals symbols are also assigned with hours, days and months. Chinese horoscope by date of birth also has balanced theory of five elements i.e. wood, metal, air, fire and earth and teachings of Yin-Yang, Wu Sing along with the aspects mentioned above. According to Chinese astrology, a person's future, present and past could be defined using these aspects and his future and personal characteristics could also be provided with accurate and powerful predictions.

Several people athwart the world are influenced by Chinese horoscope that is one of the most popular and ancient form of horoscope. The belief on which Chinese astrology and Chinese zodiac signs are based is that at the time of birth, the position of five significant planets decide the fate or destiny of a person. The five major planets taken into account by Chinese astrology chartare Venus, Mercury, Jupiter, Mars and Saturn, the moon, the sun and comets.

Some ancient Chinese valued the Earth over the stars. These scientists looked for the reasons behind the natural order of things. They agreed that all things had a basis in one of Five elements. To their understanding, all things were made from Fire, Earth, Metal, Water, or Wood.
They examined how these basic elements worked together and against each other. Wood creates Fire, Fire turns to Earth, Earth creates Metal, Metal creates water, and water creates Wood.

Below is our zodiac calculator. You can use it to find out about your Chinese zodiac sign and discover your horoscope for 2021.