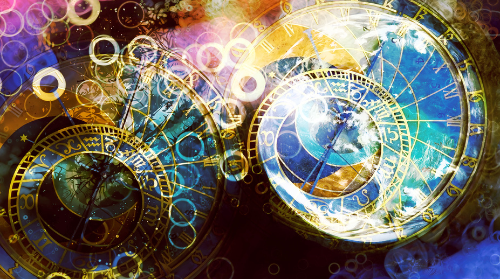 The word astrology was coined from two Greek words, Astra which means "a star" and "Logos" which means logic or reason. This means the study of doctrines and law as shown by the stars and planets. So, in other words, astrology is the study of the heavenly cycles and cosmic events as they are reflected in the earthly environment. Astrology makes use of cosmic patterns that is discovered in the rhythmic motions of the planets to explain the incidence of the everyday activities of people. Astrology is a study that views human being as creatures that are not just influenced by their hereditary factors and their environment, but also by the movements and relative positions of celestial objects and also by the state of the solar system at the exact moment that they are born. This study views the planets as basic life forces, the tools that humans live by and the basis of their attributes and character. These planetary forces are said to take on different forms according to their zodiacal position and on the way that they relate to one another and their environment.

One branch of astrology that deals with planets describes these relationships, the position of the planets in relation to the place of birth tells us of their expression in the spheres of life as described by the astrology houses. Astrology deals with interpreting the functions of these players (that is, the planets and other celestial bodies) and their qualities (the signs, elements and houses. It also deals with the creation of a synthesis. Astrology is said to be capable of providing people with a complete and comprehensive details of a people and their potential based on the natal horoscope.

Astrology can also be used as a way of divining information about terrestrial events. The origin of astrology can be traced back to as far the second millennium BCE and it has established its roots in the calendrical systems that are often used to predict seasonal shifts and to interpret celestial cycle as signs of divine communications. Several cultures believe that astronomical events are important and some cultures like Chinese, Maya and Indians have come up with detailed and complex systems for predicting terrestrial events from celestial observations. One of the oldest astrological systems that are still being used is the western astrology which origin can be traced back to the 19th to 17th century BCE in Mesopotamia. History Of Astrology

The origins of Astrology can be traced back as far as the dawn of civilization when the humans were said to have been measuring the stars and the planets. But, astrology has been developing over the ages. The overview of this evolvement of astrology can be seen below.
In ancient times, astrology was said to be a belief that all these celestial events are caused by things that have happened before them and that people are not capable of making choices or control what happens. In those eras, people were said to have hunted, planted and migrated according to the positions of the stars. In those times, it was believed that living in rhythm with the nature's cycles helped civilizations survive. For several centuries, astronomy and astrology were the same. At those times, human beings thought that they were at the mercy of nature and they viewed the skies with fear and awe. It was believed that weather was the work of nature's gods because a flood could just destroy the food supply as easily as the proper amount of rainfall could guarantee a bountiful harvest. These people would track the stars in order to plan and predict certain patterns.


30,000- 10,000 B.C
The history of astrology is said to be traced back to this time. In this time period, people developed the map of the stars and archaeologists have discovered cave paintings, mammoth tusks and bones that have been marked with lunar phases. In this period, humans have coped with the uncertainty and the change brought on by natures cycle by tracking the stars. They used the stars to find their destinations and as directional guide.


6,000 B.C
In this time period, the Sumerians in the city of Mesopotamia observed the movements of the stars and planets.


2,400 - 331 B.C
The people of Babylon who are also known as Babylonians or Chaldeans continue the work of the Sumerians from Mesopotamia and the invented the first astrological system over thousands of years. They were also known to have created the zodiac wheel that is often used in modern times (with houses and planets) around 700 B.C. The oldest known horoscope chart is said to be created around 409 B.C.


331 B.C - 5th CENTURY A.D
After Alexander the Great conquered Babylon/Chaldea, the Greeks also started making advances in astrology and other branches of study like Geometry, Mathematics, Philosophy and Medicine. The names for planets and zodiac signs that are used in modern times are said to have been seen in Greek literature. Tetabiblos, one of the most revered astrology works is said to have been written by Ptolemy in 140 A.D.


5th CENTURY A.D
In this time period, the Roman Empire falls and western astrology is said to disappear for 500 years. The Arabs continue studying and developing the Greek theories of Astrology.


THE MIDDLE AGES
In this time period, astrology developed impressively and it was an important part of culture that was practiced by doctors, mathematicians and astronomers. The advances in the field of mathematics enabled astrologers to develop more precise, accurate and sophisticated charts. A mathematics professor named Placidus and a monk developed the house division system that is used by astrologers today. Several esteemed European universities like the University of Cambridge had astrology chairs and members of the royal family had royal astrologers. Several popes believed in astrology. However, belief in astrology started to reduce as the church gained power and it was viewed as heresy and superstitions during the Inquisition. A famous astrologer of that time, Galileo was found guilty of heresy and had to renounce his Astrology belief in order to stay alive.


17th - 18th CENTURY
Astrology was seen as a form of entertainment instead of a valid field of science and most astrologers started working under the guise of a false identity.


19th CENTURY
People started showing renewed interest in spirituality and mysticism in England gave life and energy to astrology in Europe. The psychologist known as Carl Jung started using astrology in analysis. There were also advances in astrology in this time period.


20th - 21st CENTURY
In 1920s, various media outlets like the magazines and newspapers started publishing the sun sign based horoscopes that is still being used today. However, in recent times, people can now use the computer to cast charts. This makes it less stressful than having to do the charts with your hands.